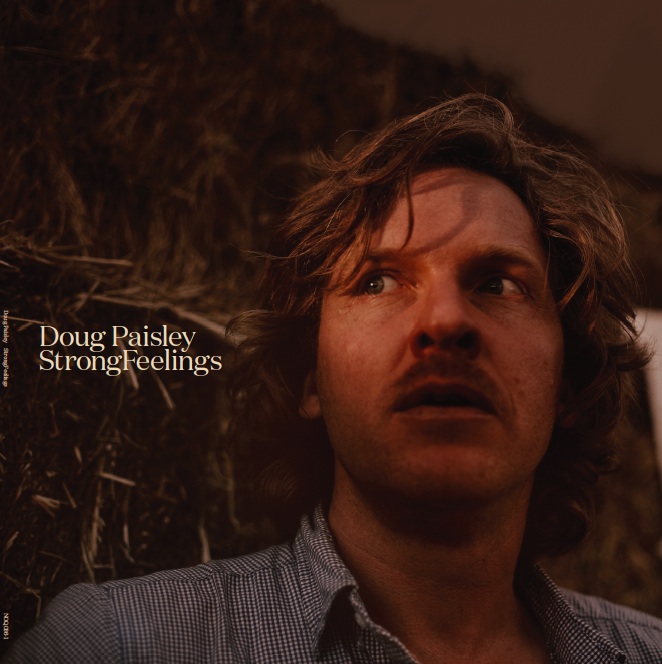 With the kind of understatement that’s typical of the man, Doug Paisley describes his wondrous new album Strong Feelings as “just 10 new songs. It’s a lot less simple and unadorned than other recordings I’ve made, but it’s just as earnest and straightforward as what I’ve done before.”

This is all in keeping with the Toronto songwriter’s low key approach to his art, preferring to let his songs speak for themselves. A fact born out by the nature of the effusive praise given to Paisley’s last effort, 2010’s Constant Companion. MOJO, who included it in their top ten albums of the year and extolled its “rare kind of purity,” declared that “an anti-star is born.” Rolling Stone called it a “nearly perfect singer-songwriter record,” while Uncut singled it out as “sure-footed and ageless…uncluttered, sad and unerringly lovely.”

Both Constant Companion and 2008’s self-titled debut drew their power from the minimalism of Paisley’s unique take on 1970’s American folk rock. Largely set to simple
arrangements of acoustic guitar and piano, it was an unobtrusive style that served to heighten the impact of his beguiling songs about relationships in various states of ruin and flux.

Not that Paisley has forsaken any of the delicacy and quiet rapture of his previous work. Recorded in a new analog studio in Toronto (save for one memorable session in the
lobby of Ottawa’s National Arts Centre, with Hudson playing a Steinway piano that belonged to composer Glenn Gould), Strong Feelings bears his usual trademark signature, but it’s an altogether more assured work, full of rich texture and fine detail.

“This album took a lot more time than the others and involved more people,” says Doug. “I find that consistent touring and identifying yourself as a professional musician can takesome of the spontaneity out of things. So as an alternative I tried to be more deliberate with this record, further developing and laboring over music where previously I might
have been more likely to cast something in its earliest stages. I tried to get into creatively challenging recording sessions to drown out my ideas of what I, or anyone else, thought my music was about.”

Tunes like “A Song My Love Can Sing” and “It’s Not Too Late (To Say Goodbye)” find him crooning like a seasoned country veteran, his voice crumpled with the same weary
heartache as Don Williams or Hoyt Axton in their prime. The steady tick of “Our Love” meanwhile, with its folksy grain and unfussy guitar, already feels like a classic Nashville
ballad.

At the other end of the scale, “Where The Light Takes You” boils to a stirring finale, courtesy of robust synths and Kelly’s great licks. The rockist “To And Fro” conjures visions of the open prairies, all golden skies and roving antelopes, essayed by warm electric guitar and a sort-of-boogie chug, while “Growing Souls” could be Dylan kicking
back with The Band on an old spiritual in Big Pink’s basement.

Elsewhere you’ll find swamp-soul organ lines, twangy six-string fills, woodwinds and the odd spot of whistling. Or, as on “What’s Up Is Down”, a languorous sax solo that fits the late-night mood of the discreet interplay between Paisley and O’Hara.

The album draws to a close with “Because I Love You”, a duet with O’Hara that addresses the mercurial nature of desire. “I tend to write a lot of love songs,” Paisley
offers, “but I think the feelings that drive many of the songs on this album – survival, futility, attraction, obsession – are broader. They’re feelings that are as strong as love
and just as important.”

This is echoed in the album title itself, of course. Its creator says that the phrase ‘Strong Feelings’ “was stuck in my head for about a year and it kept coming up in people’s
speech from time to time. I’d like to think everyone has some personal association with those words, perhaps relating to earnestness or early romances.”

O’Hara’s inclusion on Strong Feelings marks the continuation of Paisley’s affinity for the duet. Fellow No Quarter stablemate Jennifer Castle appeared on Constant Companion, as did The Pining’s Julie Faught and, on the striking duet “Don’t Make Me Wait”, Canadian starlet Leslie Feist.

Prior to going solo, Paisley spent the best part of a decade touring with fellow countryman Chuck Erlichman as a bluegrass act named Stanley Brothers: A Loving Tribute. They then recorded a pair of albums of original material in a similar vein under the catch-all moniker, Live Country Music. His next project was Dark Hand and Lamplight, which set Paisley’s songs against the visual backdrops of Canadian artist Shary Boyle. As if to accentuate the fluid connection with his past, the song “To And Fro” – originally written for Dark Hand and Lamplight in 2006 – has finally found a home on
Paisley’s latest opus.

Strong Feelings is an album that tries to articulate the speech of the heart in universal terms. One of its key tunes, “Radio Girl”, can even be taken as a microcosm of Paisley’s overarching theme. “It draws on some of the things people derive from their relationships with music and with musicians: longing, comfort, intensity, importance,” he expounds. “I try to always be working in service to the songs I’ve written.”